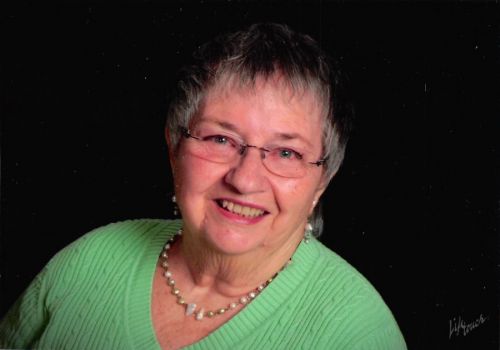 Marilyn Anna Bieganek (Hansmann) left this world to join her beloved Stanley in heaven on February 10, 2017. The North Minneapolis girl who married the small-town boy and became the happy mother of 7 children, 11 grandchildren and 29 great grandchildren and will be deeply missed by her large family and many friends.

After meeting her future husband at a dance near Platte Lake and having a 3-year courtship, Marilyn and Stanley were married on August 18, 1951 at St. Annes Church in Minneapolis.

Moving to Harding, Minnesota where her husband was the owner of Bieganek Implement, Marilyn quickly became an active and integral member of the community and church. even though she was told to act her age when she was caught by a neighbor cartwheeling with her kids in the front yard!

Marilyn formed and served with the local PTO for Harding Elementary School. She taught catechism for Holy Cross Church, fearlessly calling on her own children when she didnt get the answers she was looking for. She worked hard as an active member of Holy Cross Parish in Harding having many roles with the Rosary Soldality since 1952, lead the waitress staff for the annual church bazaar for over 30 years and then took over the bazaar pie room when that became too difficult. And of course, you cant forget the many activities of the Harding Commercial Club with the annual 4th of July Parade, John Deere Day, and Santa Visits.

Marilyn was a constant reader, loving her romance novels and the StarTribune. The radio was always tuned to WCCO, always keeping in touch with her hometown, Minneapolis. Happiness came in her many flower gardens, watching and feeding her birds, summer and fall days at the cabin with her family, traveling with her family, singing alongside Stanley at the piano and of course cooking up a storm. Marilyn was Martha Stewart before Martha even existed and her family enjoyed the best spaghetti, chow mein, dill pickles, baked breads, cabbage rolls and of course, cookies. Food was definitely love in her house.

Marilyn had an amazing sense of style and it didnt matter if she was going to church or going to a gala, but she was always the belle of the ball. As long as she had her diamonds on, she was not to be missed.

After suffering a stroke, Marilyn worked hard to stubbornly maintain her independence and her family is extremely grateful for the many neighbors and friends who took care of her and always kept an eye on her. The family would also like to thank her many caregivers at the St. Joseph Hospital, Pierz Essentia Clinic, Horizon Health, St. Cloud Hospital and Quiet Oaks Hospice House.

To order memorial trees or send flowers to the family in memory of Marilyn Bieganek, please visit our flower store.