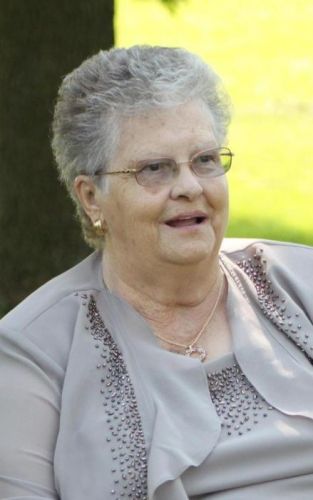 A Funeral Service will be held at 11:00 a.m. on Saturday, March 26, 2016, at St. Johns Lutheran Church of Dixville, rural Royalton with Rev. David Franzmeier officiating. Burial will be in St. Johns Cemetery. A luncheon will be held at the St. Michaels Parish Hall, in Buckman, following the burial.

Visitation will continue at the church on Saturday one hour prior to the service.

Marjory Helene Kriefall was born on April 16, 1940, in Little Falls, Minnesota the daughter of Alvin Jim and Ruth (Kuschel) Kriefall. She grew up on the family farm three miles south of Buckman. She attended District 18 in Dixville through the eighth grade and then graduated from Royalton High School, Class of 1958. After graduation, she moved to Minneapolis and worked at Marquette National Bank. She then returned to the Royalton area where she worked at Royalton High School as the Secretary to the Superintendent. She later decided to return to Twin Cities area and worked in St. Paul at Remington Rand Division of Sperry Rand Corp. in security. Marjory was united in marriage to Lawrence Edward Guck on July 2, 1962, at St. Josephs Catholic Church in Morrill, MN. In 1969, Marjory Lawrence moved up north and purchased a farm south of Buckman. Later on in 1973, they purchased the farm Marjory grew up on. Marjory also worked at Stearns Manufacturing in Sauk Rapids, MN. She was a faithful member of St. Johns Lutheran Church at Dixville where she played organ for over 50 years. She was also a member of the Ladies Aid. Before her vision deteriorated, she read a lot of romance novels, loved to sew, enjoyed vegetable and flower gardening and canning, caring for her plants in the house, setting puzzles, solving crossword puzzles, playing cards with the neighbors, researching family history and was an excellent cook and enjoyed cooking for her family. Marjory had beautiful handwriting and loved to paint ceramics until her tremors took over. She was a member of area bowling teams, caretaker for her parents, mother-in-law and two of her second cousins.

Marjory was preceded in death by her parents and granddaughter, Kelsey Kay Eden (1990).

To order memorial trees or send flowers to the family in memory of Marjory Guck, please visit our flower store.