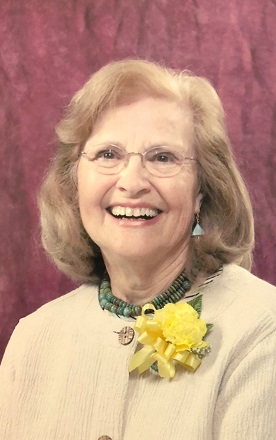 Nancy Lou Nelson Starr of Little Falls, MN, 83, beloved, wife, mother, and grandmother, passed away on Wednesday, July 4, 2018. Nancy was born on August 20, 1934 in Tracy, Minnesota to Will and Doris Nelson. Over the years, she shared many fond memories of growing up on the farm. She graduated from Tracy High School in 1952. Nancy married John W. Starr, her high school sweetheart, on September 3rd, 1955. In 1956 she graduated from The University of Minnesota, Minneapolis with a degree in Home Economics. Nancy taught at Roseville High School for a year before moving to San Antonio, Texas in 1956 with John, who was stationed there while serving in the Army Dental Corps. Their first two children, Garrett and Susan, were born in San Antonio. John and Nancy moved to Little Falls, MN in 1960 where John joined Falls Court Dentists. John and Nancy added Sara and Jack to their family soon after.

Nancy was a loving mother and homemaker. She enjoyed sewing for her family, including her own wedding dress. She was a talented cook and always warmly welcomed friends and family into her home. In around 1973, Nancy began working at St. Gabriells Hospital as a nutritionist and worked there for many years. Nancy was also interested in architecture and design, and helped design two homes.

Nancy was a dedicated member of First United Church and the American Association of Women. She enjoyed playing bridge, golfing, and downhill skiing with their friends and family. She loved spending time with her children and grandchildren at the Fish Trap Lake family cabin.

John and Nancy lived at 39 Edgewater Drive, Little Falls for many years. After Johns retirement, John and Nancy looked forward to spending their winters with family and friends in Sun City West, Arizona.

Nancy was preceded in death by her parents, daughter Susan Gerling, sister, Clarice Rose, and husband of 61 years, John Starr.

To order memorial trees or send flowers to the family in memory of Nancy Starr, please visit our flower store.