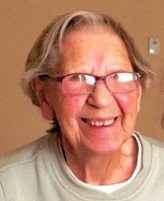 Patricia Louise Krueger was born November 12, 1929 in Sauk Rapids, MN to Henry and Bertha (Skuza) Krueger. She grew up in the Royalton area where she attended school. Pat graduated with the class of 1947. She was united in marriage to John Nelson in 1953 in Royalton. The couple made their home in the St. Paul, MN and Hudson, WI. They later divorced. Pat worked in the insurance industry and for Montgomery Wards for many years. She enjoyed playing golf, cards, her trips to the casino and doing crafts. She was a faithful member of Trinity Lutheran Church in Hudson, WI for many years.

She was a loving sister to LeRoy Krueger (Renee Holthaus) of Royalton; sister-in-law to, Ella Mae Krueger and Joanne Krueger both of Royalton and many nieces and nephews.

To order memorial trees or send flowers to the family in memory of Patricia Nelson, please visit our flower store.