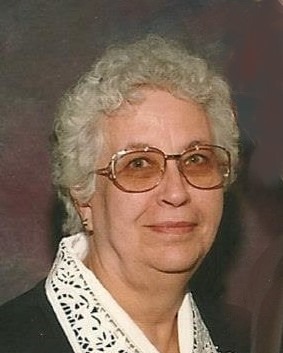 Pat was born on February 10, 1939 in Watkins, MN, the only child of Daniel and Marie (Becker) Goodridge. In her early years she lived with family friends in Minneapolis and Merrifield, and then moved back to Minneapolis to be with her mom and step-dad when she was 13. When she was 16 her step-dad’s military job took the family to West Germany. As a teen reporter on the Army base she had the opportunity to interview Elvis while he was stationed there. After graduating from Frankfurt American High School in Germany she worked for American Youth Activities caring for the children of military families. Pat moved back to the States when she was 19. She took a job at Singer Sewing Machines in Minneapolis and later worked at Leberman Music.

Pat was set up on a date with Joseph “Joe” O’Neil and six months later, on April 13, 1959, they were united in marriage at Immaculate Conception Catholic Church in Rice, MN. They resided near Rice from the time of their marriage until 1967 when they moved to a farm northeast of Pierz.

She spent her years raising their ten children at home and helping on the farm. After Joe was injured in a farming accident, she went to work at Super 8 Motel and Christus Group home, both in Little Falls. Pat went back to college in 1981 and graduated in 1983 with a degree in Child Development. After graduation, she and her best friend Anna Young started the Brainerd YMCA Daycare. She then owned and operated Wee Care Center in Pierz from 1986 to 2004 caring for hundreds of children. For much of her adult life, Pat was actively involved at St. Joseph’s Catholic Church as a member of the adult choir and a Eucharistic Minister. She volunteered in her community by driving seniors to appointments and being a foster grandparent at the elementary school. She was an avid reader and crossword puzzle solver. Pat loved going to the casino with Joe and enjoyed theater and concert trips with friends and family. She was interested in genealogy and researched both the Goodridge and O'Neil family trees. She loved spending as much time as she could with her kids, grandkids, and great-grandkids.

Meeting Pat at Heaven’s gate were her husband Joe, her daughter Margie O'Neil, her mother and step-father Marie and Myron Bruning, all of Joe’s brothers and sisters, many nieces and nephews, and her father Daniel Goodridge.

Emblom Brenny Funeral Service is Cherishing the Memory and Celebrating the Life of Patricia. 320-632-4393.

To order memorial trees or send flowers to the family in memory of Patricia O'Neil, please visit our flower store.