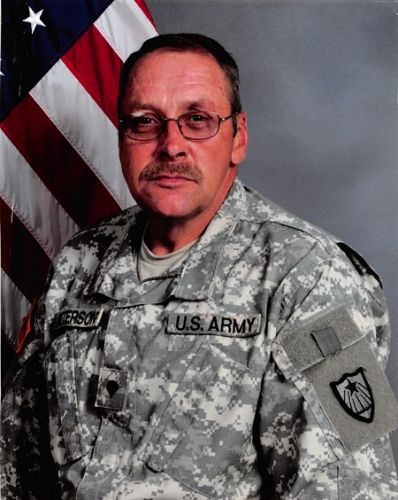 Paul Peterson, 59 year old resident of Little Falls died Thursday, December 14 at his home with his loving family by his side. A funeral service will be held on Thursday, December 21 at 11:00 at Zion Lutheran Church with Rev. Gary Hendrickson officiating the burial will be held at the Minnesota State Veterans Cemetery. A visitation will be held on Wednesday, December 20 from 4:00-7:00 P.M. at Emblom Brenny Funeral Service and from 10:00-11:00 A.M. on Thursday at Zion Lutheran Church. The Little Falls American Legion Post #46 will conduct the militaryrites.

Paul Alin Peterson was born February 9, 1958 in Moorhead, Minnesota to Howard and Lois (Alin) Peterson. He attended school in Moorhead and played football for the Moorhead Spuds. He graduated from Moorhead High School with the class of 1976. He was united in marriage to Catherine Cathy Ohnstad on June 2, 1984 at Zion Lutheran Church in Little Falls. He served his Country in Army National Guard from December 8, 1978 until his honorable discharge on June 1, 2010. He worked the following jobs throughout his life: flowers by Marty Hansen, Amoco by Steve Beckacheck, City of Moorhead garbage, Budweiser security, CSMS and Mates at Camp Ripley and bartended at the Little Falls VFW. He enjoyed working on vehicles, lawn mowers, going to We Fest, fishing, hunting, snowmobiling, 4 wheeler rides and playing with his grandchildren. He was a member of Zion Lutheran Church and Little Falls American Legion Post #46.

To order memorial trees or send flowers to the family in memory of Paul Peterson, please visit our flower store.