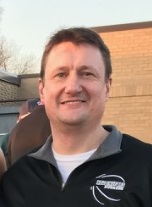 Randal Ryan Hohbein, 46-year-old resident ofRice, MN died at his home on Thursday, August 29. A funeral service will be heldon Tuesday, September 3 at 12:00 P.M.at Emblom Brenny Funeral Service in Little Falls. A visitation will be heldon Tuesday, September 3 11:00 A.M. 12:00P.M.atEmblom Brenny Funeral Service in Little Falls. There will be a service and burial at the North Dakota State Veterans Cemetery in Mandan, ND at a later date.

Randal Ryan Hohbein was born on October 13, 1972 in Bismarck, North Dakota to Sidney and Karen (Hickel) Hohbein. He grew up in Mandan, North Dakota where he Graduated from Mandan High School. He attended North Dakota State University and was in the Army ROTC and was commissioned as a Second Lieutenant upon graduating. He ended his military career as a Captain in 2001. He was united in marriage to Lisa Johnson on October 17, 1998 in Fergus Falls, Minnesota. He treasured spending time with his daughters, Rilee and Makenna, whohe always toldthat he loved them to the moon and back. Randy was an avid sports fan who could talk sports with anyone, but golf was his passion. He loved the Dallas Cowboys since he was a little boy, and one might say he had a man-crush on Troy Aikman. Some of Randys favorite things:

Randy and his friends had a wicked sense of humor and many people were the recipients of practical jokes concocted in the basement of his mothers house. Randy was a loving, compassionate father, husband, son, brother and friend. He was loved by many and will be missed by all.

He was preceded in death by his father-in-law, David Johnson, brother-in-law, Jeff Nauman and his maternal and paternal grandparents.

The arrangements for Randy are with Emblom Brenny Funeral Service in Little Falls MN.320-632-4393

In lieu of flowers donations are preferred to The Humane Society or a charity of your choice.

To order memorial trees or send flowers to the family in memory of Randal "Randy" Ryan Hohbein, please visit our flower store.