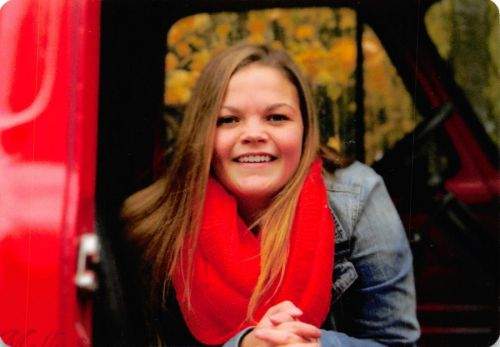 Rebecca Becca Schlegel, 21 year old resident of Brainerd, MN died May 31 as the result of an automobile accident in Crow Wing County, MN. A Memorial Mass will be held on Friday, June 8 at 11:00 A.M a visitation will be held on Thursday, June 7 from 4:00-8:00 P.M. and from 9:30 A.M. until the hour of the service on Friday at the church at Holy Cross Catholic Church in Harding, MN with Father David Maciej officiating. The burial will be held in the parish cemetery.

Becca was born July 1, 1996 in Brainerd, MN to Robert Schlegel and Jennifer Dambowy. The day she was born was great joy in the family since she was the first Schlegel granddaughter. Pooh Bear as her grandpa Dombovy referred to her as grew up in the Pierz and Brainerd area. She attended school in Pierz, MN and graduated from Pierz High School with the Class of 2015. Rebecca was a hardworking young woman often working three jobs. She most recently worked as a manager of the Blue Goose Liquor Store in Garrison and as a Dairy Technician for Schlegel Farms. She was quick witted and was often pulling a joke or two on those she loved. Her real love was for that of her four year old daughter, Lexi who Becca adored and loved with all of her heart. Becca treasured time spent with boyfriendLogan,family and friends, camping, fishing, hunting, doing crafts and laughing. She did not care for Horseradish! Becca was active with co-ed softball leagues throughout her life playing in various leagues.

She was preceded in death by her grandfather, Robert (Bud) Schlegel in 2012.

In lieu of flowers memorials are preferred to the family of Rebecca Schlegel.

To order memorial trees or send flowers to the family in memory of Rebecca "Becca' Schlegel, please visit our flower store.