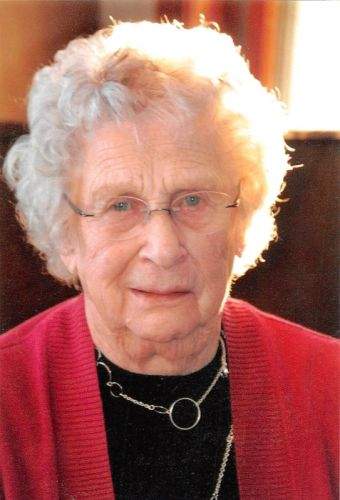 Rita Kloss was born April 6, 1925 in Elmdale, Minnesota to the late Steve and Mary (Habas) Nouis. She grew up in the Elmdale area and graduated from Upsala High School in 1944. She worked various jobs throughout her life: Honeywell in Minneapolis, MN, J.C. Penney in St. Cloud, MN and St. Paul Store in Little Falls, MN. Rita was united in marriage to Leo Kloss on September 22, 1947 at St. Edwards Catholic Church in Elmdale, MN. The couple made their home in Bellevue Township, Morrison County, Minnesota all of their married lives. The couple enjoyed traveling throughout the United States during their retirement years. She enjoyed dancing, gardening, canning, making bread, baking, playing cards, bingo and helping Leo on the farm. Rita was a member of Holy Trinity Catholic Church, Christian Mothers and the Royalton American Legion Auxiliary.

To order memorial trees or send flowers to the family in memory of Rita Kloss, please visit our flower store.