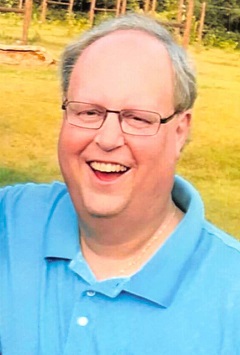 Robert Bob Sitzman 57 year old resident of Little Falls died Sunday, October 14 at his home surrounded by his loving family after a courageous 12 year fight with Prostate Cancer. A Mass of Christian Burial will be held on Friday, October 19 at 10:30 A.M. at St. Marys Catholic Church with Fr. Matthew Langager officiating. The burial will be in the parish cemetery. A visitation will be held from 4 to 8 P.M. on Thursday evening and from 9:00 A.M. until 10:00 A.M. on Friday at Emblom Brenny Funeral Service in Little Falls. A parish prayer service will be held at 6:30 P.M. on Thursday evening at the funeral home.

Robert Bob Sitzman was born February, 1, 1961 at St. Gabriels Hospital in Little Falls to the late Ervin Stubby and Alice (Sader) Sitzman. Bob grew up in Buckman, MN. He attended elementary school in Buckman and graduated from Pierz Healy High School in 1979. Bob attended the University of Minnesota in Morris, St. Cloud State and St. Cloud Technical College graduating in 1985. He was united in marriage to Mary Gwost on May 23, 1987 at St. Stanislaus Catholic Church in Sobieski. Bob worked for Apperts Food Service/Sysco as an information systems manager. He was a faithful member of St. Marys Catholic Church serving on the Religious Education Board and was a Eucharistic Minister. He volunteered for CHI/Hospice. Bob was a member of the Prostate Cancer Support Group. He was an advocate for Prostate Cancer awareness. He enjoyed riding bicycles and participated in the MS Tram Ride, watching the Minnesota sports teams, Twins, Vikings, Timberwolves, Wild and St. Cloud State Mens Hockey and photography. Bob was a #1 fan of Mickey Mouse and anything Disney. Bob loved to travel to various states and places in Minnesota.

To order memorial trees or send flowers to the family in memory of Robert "Bob" Sitzman, please visit our flower store.