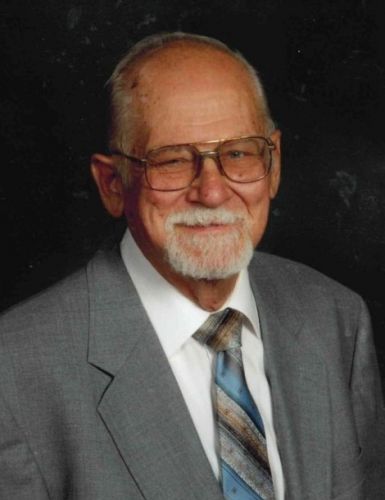 Ronald Pete M. Peterson, 87 year-old resident of Hillman, Bull Dog Lake died Sunday, November 4 at the St. Cloud Hospital. Memorial Mass of Christian Burial will be 11:00 AM Saturday, November 17, 2018 at Holy Family Catholic Church on Bulldog Lake. Father David Forsman will officiate. Visitation will be one hour prior to services at the church on Saturday.

Ron was born November 20, 1930 in Robbinsdale to Herman and Olga (Arneson) Peterson. After graduating from West High School, he married Geraldine Gerry Huebner on July 8, 1950, at the Basilica of Saint Mary Catholic Church in Minneapolis. Ron worked at Electric Machine and Manufacturing, moving his way up from parts delivery to plant manager where he worked for over 30 years. His career brought him and Gerry to Macon, GA where he lived and worked for 14 years before his retirement. After retiring, the couple moved back to Minnesota to be closer to their daughter, Constance. Ron was a member of Holy Family Catholic Church on Bulldog Lake, near Hillman, where he organized church fundraisers, Memorial Day Ceremonies and assisted in generating funds to keep the church operational for many years. He also oversaw the activities/ youth center at church. He was the Treasurer Richardson Corners Township. Ron was also an active member of the Richardson Lakes Area Lions Club; he would never miss a meeting. Ron was a hardworking man of service, always using his abilities to ensure that others were going to be okay. He was very committed to his family, who meant the world to him.

Left to cherish his memory is his loving wife of 68 years, Gerry, originally of Little Falls; daughter, Constance (Paul Hoffinger) Peterson of Eagan; and dozens of nieces and nephews and grand-nieces and nephews. He loved Paul and Constances foster children as his own grandchildren.

He is preceded in death by his parents; sisters Ferol and Elaine; and brother, Roger.

To order memorial trees or send flowers to the family in memory of Ronald "Pete" M. Peterson, please visit our flower store.