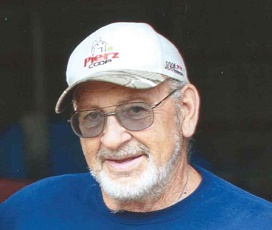 Ronald Ronnie Gross, 82-year-old resident of Harding, MN died Saturday, June 6 at St. Josephs Hospital in Brainerd, MN. A Mass of Christian Burial will be held on Thursday, June 11 at 11:00 A.M. at Holy Cross Catholic Church in Harding, MN. A visitation will be held on Wednesday, June 10 from 4-8 PM and on Thursday, June 11 from 10:00 A.M. until the hour of the service on Thursday at the church. The burial will be held in the parish cemetery. In lieu of flowers memorials are preferred to Holy Trinity School in Pierz or Holy Cross Catholic Church in Harding. The family invites all to attend please keep in mind the six feet social distancing do to the COVID restrictions.

Ronald Roman Gross was born on February 21, 1938 in Little Falls to the late Roman and Amelia Mae (Galleck) Gross. The family lived for a few short years in Lastrup, MN, before moving out West to Portland, OR. The family traveled by Model T car to Portland where Ronnies parents worked in the shipyards during World War II. The family returned to Lastrup, MN where Ronnie worked with his father on a Milk Truck route. He would occasionally drive the route by himself at the age of thirteen. As a young boy he would box with other area boys in Lastrup, forming their own boxing league. Ronnie attended grade school in Lastrup. He was in the first graduating class of Pierz Memorial High School in 1956. He was united in marriage to Joanne Adkins on October 7, 1967 at St. Josephs Catholic Church in West St. Paul, MN. The couple resided north of Harding, MN on the Gross family farm. Ronnie farmed all his life raising crops and tending to his cattle. Ronnie started rice picking at the age of 16, which he continued doing for many years. He had the longest bus route for the Pierz School District since 1998. He always made sure the kids arrived at their destination safely and made many young friends over the years. He enjoyed deer, fox, coyote and racoon hunting with family and friends. Ronnie played fast pitch softball in Pierz for several years. The couple attended Holy Cross Catholic Church in Harding; Ronnie served on the church council for two terms. Ronnie served as the Mayor and was on the City Council in Harding for 22 years. He was a member of the Lake Region Sportsmans Club, Harding Sportsmans Club and taught gun safety for 25 years. Ronnie and Joanne enjoyed spending time with the Birthday Club enjoying many laughs over the years.

Ronnie is preceded in death by his parents; two infant sisters and one infant brother; brother-in-law, John Kurt.

In lieu of flowers memorials can be sent to Holy Trinity Schools in Pierz, MN or Holy Cross Catholic Church in Harding.

The arrangements for Ronnie are with Emblom Brenny Funeral Service in Pierz, MN. 320-632-4393.

To order memorial trees or send flowers to the family in memory of Ronald "Ronnie" Gross, please visit our flower store.