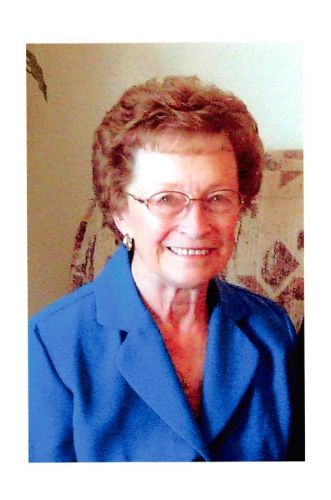 Rose Mary (Schyma) Kroll, 88-year-old resident of Osakis formerly of Flensburg died on Sunday, April 12, 2020 at Galeon Community Memorial Home in Osakis, MN. A Memorial Mass will be held on October 9th at 11:00 at the Sacred Heart Church in Flensburg with Father Jimmy Joseph and Father Tony Kroll Co-Celebrating.

Rose was the first born of twins on July 10, 1931 to Joseph and Mary (Roda) Schyma. She was left handed, curly haired and attended District #64 country school grades 1-8. She graduated from Foley High School in 1950. Rose was a devout Catholic. She began her faith journey in Gilman at SS Peter and Paul Catholic Church and remained active in her Catholic faith her entire life. In the summer prior to tenth grade Rose worked as a live-in babysitter and cook for a family in Milaca. As a junior she worked midnight shift at Highway 10 Cafe. She would hitchhike with friends to Beaver Lake Resort near Luxemburg, MN where she was spotted by her future husband, Celestine. In 1953 Rose and Celestine were joined in marriage and to this union six children were born. Cel returned to war shortly after their wedding. Rose and her twin sister, Ann, always worked and lived together. In Minneapolis they were employed at Sachs, a candy company where they boxed candy and bagged nuts, and briefly at a nut factory where they heard Twin City Arsenal in New Brighton was paying $1.45 an hour. At TCA they manufactured 30 and 50 caliber ammunition for the war. When Cel returned from the war they continued to work and live in Minneapolis for a couple years, but the farm life called so they moved to Royalton and farmed briefly with Cels family. In 1957 they bought their own farm near Flensburg where they remained until 2018 when they moved into assisted living. Rose will be remembered for her artistic and creative abilities. Rose loved to crochet, sew, garden and bake, especially her coffee cake! She could create clothing by simply looking at a picture. She made many clothes for her children in their early years and quilts for each of her grandchildren. It is rumored that kings and queens would travel the world for a slice of her poppyseed coffee cake and the trip was worth every mile. When her children were grown Rose returned to work vaccinating and debeaking chicks. She enjoyed socializing with her coworkers and traveling to various towns. Rose had many unique sayings, among them, Leave it a little better than you found it. Rose lived that phrase in the way she helped others in whatever way she could. If you were to drop in unexpectedly you could be sure to find somewhere between one to three different baked goods on her counter, a cup of coffee and a willing ear. She had time to listen to whoever came to her home.

In lieu of flowers memorials are preferred to the Douglas County Hospice in Alexandria, MN.

To order memorial trees or send flowers to the family in memory of Rose Mary Kroll, please visit our flower store.