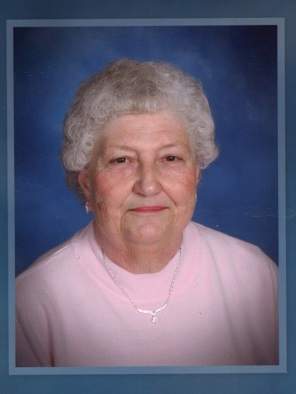 A visitation will be held on Friday, November 18 from 4:00-8:00 p.m. and on Saturday, November 19 from 9:30 until the hour of the service at Holy Trinity Catholic Church in Royalton.

Rosella Sally Waddell was born on August 4, 1939 in Mott, North Dakota to the late Vincent and Anna (Fix) Mosbrucker. She grew up and attended school in Mott, North Dakota. Sally was united in marriage to Lester Waddell on December 31, 1956 in Miles City, Montana. The couple later renewed their vows in May of 1957 at St. Vincents Catholic Church in Mott, North Dakota. The couple moved to Gillette, Wyoming for 10 years. They moved to Minnesota in 1970, where they have made their home in Royalton, MN, for 46 years. Sally worked on and off for Crestliner Boats in Little Falls for 30 years. She worked in the laminating and pontoon finishing departments. She loved playing cards, black jack, visiting with her many friends on the phone, baking, playing quilt bingo and tending to the families laundry, especially the ironing. Sally was a member of the MCCL, Holy Trinity Catholic Church and TOPS (Taking Off Pounds Successfully). She treasured her time spent with her family, especially the grandchildren and great grandchildren.

To order memorial trees or send flowers to the family in memory of Rosella "Sally" Waddell, please visit our flower store.