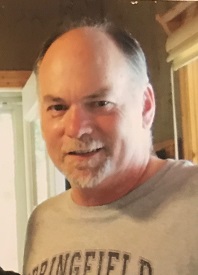 Scott Kunkel, 58-year-old resident of St. Cloud formerly of Little Falls died Sunday, May 26 after a courageous and stoic fight with cancer at his home in St. Cloud surrounded by his wife and step-sons. A Celebration of Life will be held on Friday, May 31 at 1:00 P.M. at Emblom Brenny Funeral Service in Little Falls. A visitation will be held from 11:00 A.M. -1:00 P.M. on Friday at the funeral home.

Scott T. Kunkel was born on November 20, 1960 in Mountain Lake, Minnesota to James and Dorithy (Cornelison) Kunkel. The family moved to Little Falls where Scott attended Little Falls Community Schools. He entered the United States Navy in 1977 serving his Country for four years. After his discharge from the Navy Scott joined the Minnesota Army National Guard for four more years. He worked for Morrison County for two years in the maintenance department and in the appraisers office for 30 years retiring in 2018. Scott was united in marriage to Jean Stack on February 4, 2017 at the couples home in St. Cloud. He enjoyed deer hunting, fishing, shooting at the Eastern Morrison County Range, reading, watching the History channel. Scott also enjoyed a pull tab from time to time.

He was preceded in death by his father, James on June 24, 1988 and his grandparents.

The family would like to thank Dr. Ron Hanson at St. Cloud ENT for his wonderful care and friendship, and Scotts oncologist, Dr Donald Jurgens and staff at Coborns Cancer Center.

In lieu of flowers memorials are preferred to Coborns Cancer Center.

To order memorial trees or send flowers to the family in memory of Scott T. Kunkel, please visit our flower store.