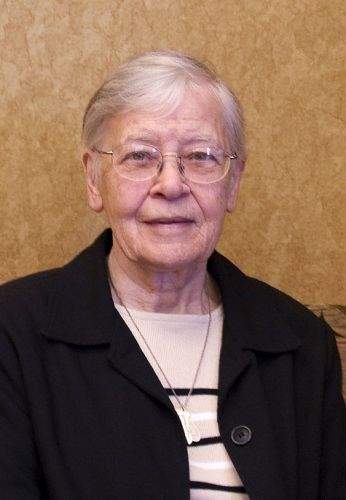 Elizabeth was born on April 26, 1927, in River Falls, Wis., the third of nine children born to the late Flavien and Florence (Gartland) Martell. She was accepted as a Franciscan Sister of Little Falls, Minnesota, on August 12, 1948, receiving the name Sister Mary Pierre and made her final vows on August 12, 1953. She was a Franciscan Sister for 68 years.

In her early years, living in Wisconsin, Betty enjoyed the beauty around her. At the age of nine, the family moved to Grafton, N. Dak., where her father was a teacher. She adapted to the Red River Valley and loved the expanse of the sky and the beautiful Northern Lights.

During her high school years, the Presentation Sisters from Fargo came to Grafton to catechize and work with the youth. The sisters made a lasting impression and planted the seeds of Bettys vocation. After graduation, she worked for several years and joined the Franciscan Sisters of Little Falls.

Bettys sister, Jeanette, followed her into the Franciscan Community and they shared a close bond throughout their lives. Family ties were very important, and both sisters reached out to family members especially to their sister, Yvonne. Sister Elizabeth was an avid reader, an expert Scrabble player and baked many delicious cookies.

To order memorial trees or send flowers to the family in memory of Sister Elizabeth Martell, please visit our flower store.