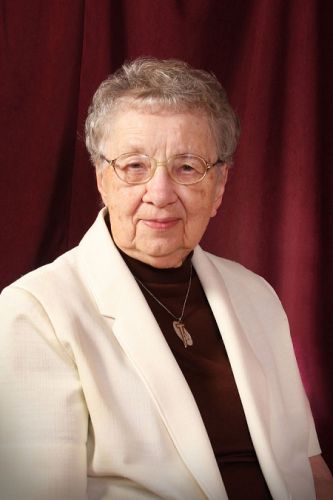 Eleanor Stanoch, the sixth of 10 children of Michael and Mary (Pintok) Stanoch, was born on April 19, 1921 in Opole, Minn. Her parents had a deep faith and a great spirit of generosity, traits which they passed on to their children. Eleanor attended a district school in Holdingford. She was eager to learn and was able to complete her elementary education by the time she was 12 years old. Due to the ill health of her mother, Eleanor put off high school for two years to help with the work around the house. After that, she attended St. Francis High School and completed it in three years.

Sister Evangeline enrolled at St. Gabriels School of Nursing and became a registered nurse. She completed a postgraduate course in nursing at the Kenny Institute in Minneapolis. During her years of ministry, she served as a staff nurse, medical-surgical supervisor and director of Nursing. Physical limitations caused her to turn to pastoral care after more than 30 years of bedside nursing. Patients and staff appreciated her gentle, compassionate presence. To her, these encounters with patients and family were both an awesome challenge and a humbling experience.

From her earliest days on the farm, love of nature was a part of her being. A favorite pastime was to go for a quiet walk and observe the beauty of her surroundings. She loved gardening, fishing, reading and making candles. Of candle making she said, Much of my first work was accomplished by trial and error. I enjoyed the work and the peace and solitude that was mine in the candle shop. She became known for her beautiful candles which enhanced many celebrations including weddings and anniversaries. Sister Evangeline was a person with a quick mind and a willingness to serve others. She was a person who gave her best efforts to her work and left the results to God. She valued her faith in Jesus and cherished the privilege of daily Mass and community prayer.

Sister Evangeline was preceded in death by her parents; brothers Leo, George, Alois, Alfred and Edward; sisters Sister Seraphine OSF, Elizabeth Trutwin, Martha Skwira and Bernadette Kedrowski. Survivors include her Franciscan Community and her nieces and nephews and extended family.

To order memorial trees or send flowers to the family in memory of Sister Evangeline Stanoch, please visit our flower store.