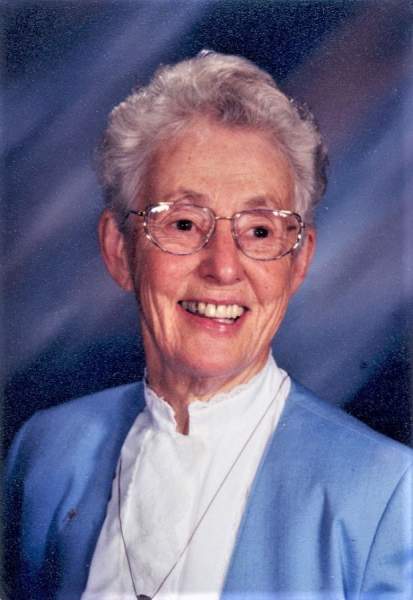 Sister Frances attended grade school in Randall and graduated from St. Francis High School. She studied Spanish at the Intercultural Formation Center, Cuernavaca, Mexico, and learned drawing and pottery at the University of Minnesota, Morris, Minn.

Known to everyone as Sister Fran, she was an "all-around-sort-of-person" who had many talents. She was creative in candle-making and produced beautiful, original pieces of pottery. She was very dedicated to serving others, especially the elderly and handicapped. She was the personal care assistant to Sister Mary Schuman for 23 years.

Sister Frances was preceded in death by her parents and siblings: Marguerite Larson, LeRoy, George, Sister Veronica, OSF, Joe, Gertrude Thesing, Jerry, Jim and Raymond.
She is survived by sisters-in-law, Marie Drew of Randall and Pat Kempenich of Pine City, 48 nieces and nephews, and many, many grand- and great-grand nieces and nephews and her Franciscan Community.

Receiving of the body of Sister Frances will be held on Thursday, July 28 at 9 a.m., followed by visitation until the time of the funeral at 11 a.m. at St. Francis Convent, Little Falls, Minnesota. Masks are required. Mass will be livestreamed on YouTube: https://www.youtube.com/channel/UCiyFvZ53PAfd1apBC88kEuQ.

To order memorial trees or send flowers to the family in memory of Sister Frances Kempenich, please visit our flower store.