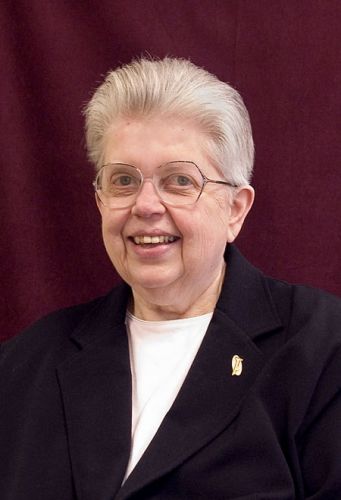 On a windy, stormy night, June 7, 1939, Antonette Marie Kalis was born at St. Gabriels Hospital in Little Falls, Minn., to the proud parents, Anthony and Kathryn (Quigley) Kalis. Big brother, five-year-old William, and his parents welcomed Antonette to their home in Royalton.

For many years, Anthony owned and operated a garage in Royalton, while Kathryn supported him in his work and cared for their children and grandmother. The family schedule revolved around the work at the garage.

Antonette attended grade school and began high school in Royalton. In her sophomore year, she enrolled at St. Francis High School as a day student. After graduation from high school, Antonette attended St. Marys School of Nursing in Rochester and became a registered nurse. Later, she studied at Cardinal Stritch College in Milwaukee, and earned a degree focusing on persons with developmental disabilities.

Sister Latona had an exceptional talent in dealing with people and especially loved being with the elderly. It has been said of her, She knows how to respond to older people, how to keep their minds at attention and keep them at ease. In the 20 years that she served at St Ottos Care Center, she helped plan and oversaw the construction of the new facilities, Alverna Apartments and St. Camillus Place. Sister Latona was very innovative in establishing the first Adult Day Care in Minnesota, and the fourth such service in the entire nation! Her love for the less fortunate led her to coordinate the opening of 10 group homes for the developmentally disabled in western Minnesota. She said, These people are wise in their simplicity and limitations. They keep me constantly aware of the true value of life. Sister Latona believed that life was about forming community in which we support and care for each other.

Sister Latona employed her artistic and creative talents in decorating and beautifying areas in which she served; her hobbies included counted cross-stitch and card-making. One of her outstanding projects was the creation of a hardanger altar cloth which she made as a Jubilee gift for her aunt, Sister Mary Kalis.

She was preceded in death by her parents and brother, William. Survivors include her sister-in law Mary Kalis of Zeeland Mich., her niece Cathy Bailey (Mike) of Zeeland, grandniece Madison, grandnephew Carter and her Franciscan Community.

To order memorial trees or send flowers to the family in memory of Sister Latona Kalis, OSF, please visit our flower store.