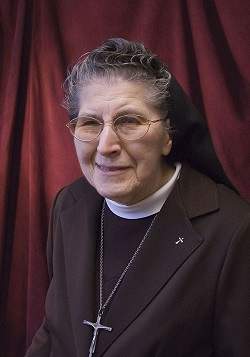 Hildegard Anna Blonigen was born on August 31, 1926, the fifth of 10 children of Christopher and Anna (Rausch) Blonigen, in Spring, Hill, Minn. She grew up during the difficult days of the Depression. Her father came home from World War I with some physical disabilities. During her childhood, the Blonigen family moved to a farm near St. Martin, Minn. She attended District School # 125 which was within walking distance of their home. Hildegard learned many of her home-making skills from her mother who was an avid seamstress, cook and gardener. Family prayer was an important part of the Blonigen family life.

Throughout her life, Sister Mary Adella had varied ministries. In her earlier life as a sister, she was a baker, housekeeper and home visitor. Her time at the bishops residence in Duluth held special memories. It was there that Bishop Anderson taught her how to roast a turkey with dressing for Thanksgiving and roast a lamb for Holy Thursday. The bishop was like a brother to her and to everyone. For almost 25 years, Sister Mary Adella made and cut the hosts which would become the Body of Christ in the Eucharist. Her days in the Altar Bread Room were filled with contemplation as she often prayed for the person who would receive the host. She loved parish ministry and endeared herself to many people in areas in which she worked.

A favorite hobby and pastime for Sister Mary Adella was the making of thousands of rosaries over a span of more than 50 years. Sister Mary Adella also collected religious articles to send to prisoners. She appreciated the opportunity for daily Mass, Holy Communion, prayers in common with her sisters and living in community. She had a deep faith and love for God and the Blessed Mother. She loved visits with family and friends, particularly with her nephew, Brother Albert Becker, OSC.

Sister Mary Adella was preceded in death by her parents and siblings: Joseph, Aloysius, Clodoald, Mary Anna, Leo, Agnes and Marcella. Survivors include her sister Catherine Hommerding and brother Christopher, both of Cold Spring, numerous nieces and nephews and her Franciscan Community.

A Mass of Christian Burial will take place at St. Francis Convent on July 8, at 11 a.m. Friends may call at St. Francis Convent on July 7, from 4-8 p.m., with a Franciscan prayer service at 7 p.m. and from 8:30 a.m. until the time of the funeral on July 8, at 11 a.m. Arrangements are by Emblom-Brenny Funeral Service, Little Falls.

To order memorial trees or send flowers to the family in memory of Sister Mary Adella Blonigen, please visit our flower store.