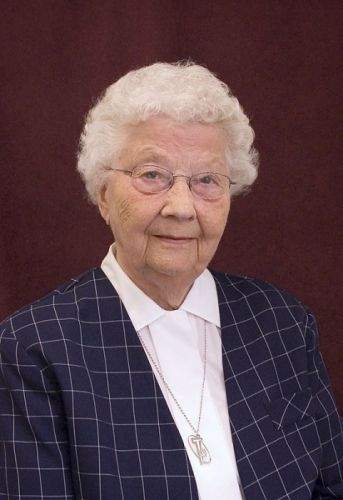 On August 15, 1916, Andrew and Mary Sanoski welcomed Cecilia Marie, the ninth of ten children, into their family in Minneota, Minn. The family later moved to Morrison County where Cecilia attended a country school near Flensburg. She enrolled at St. Francis High School, Little Falls, graduating in 1935.

Sister Bernarda was licensed as a hospital administrator by the Minnesota Department of Health in 1960 and served as administrator of St. Ansgar Hospital, Moorhead, for 18 years. In 1978, she was named Woman of the Year by the Fargo/Moorhead Young Womens Association.

She received a certificate as a pastoral associate from St. Margaret Health Center, Kansas City, Kans. She was elected to the Community Board of the Franciscan Sisters in 1980 and served for four years. During that time she was also a member of the founding Board of Directors of Franciscan Sisters Health Care, Inc.

Sister Bernarda then served in pastoral care at McKennan Hospital, Sioux Falls, S. Dak., Trinity Memorial Hospital, Cudahy, Wis. and St. Francis Medical Center, Breckenridge. She then did parish ministry in Swanville and Flensburg before retiring to the motherhouse in 2014.

To order memorial trees or send flowers to the family in memory of Sister Mary Bernarda Sanoski, please visit our flower store.