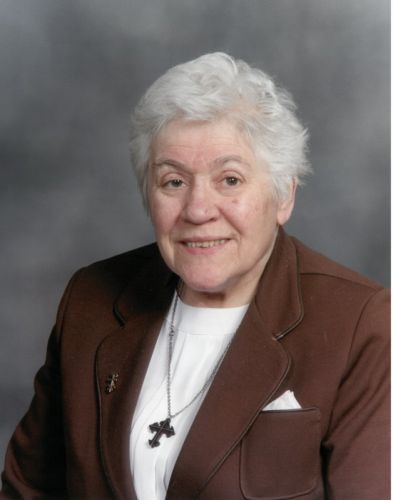 Sister Mary Cecilia Schmitt, 92, died on July 1, 2020, at St. Francis Convent, Little Falls, Minn. A celebration of life will be held Sunday, August 22, 2021, for Franciscan Sister Mary Cecilia Schmitt, 92, who passed away July 1, 2020. Mass will take place at St. Francis Convent, Little Falls, at 11 am with a visitation from 9-11 am. Masks are required. Mass will be livestreamed on YouTube: https://www.youtube.com/channel/UCiyFvZ53PAfd1apBC88kEuQ

It was a cold, wintry day, March 27, 1928, when little Joan Schmitt was born to Nicholas and Anna (Donnay) Schmitt in Rice, Minn., the second of three children. She enjoyed a happy childhood, playing with her older brother, Ralph, and eventually with her younger brother, Tom.

Joans grade school experience at District #30, a one-room eight-grade school, was a thrill. After completing her assignments, she would read books all day. In fact, little Joan read books half into the night! Lucille Thomas, a high school sophomore from Mayhew Lake, who had taken piano lessons for one year gave Joan some music books and Joan taught herself. Joan never had weekly lessons from a professional until she began high school, but she had a passion for music and learned to play difficult compositions. When she could not find music, she composed her own. By the age of 10, Joan was teaching neighbor children at 10 cents a lesson. By age 12, she began playing organ in church.

Prayer was a daily part of the Schmitt family. As a small child, Joan developed a lifetime love for prayer and contemplation. She was only 10 when she decided to become a sister, after the example of her great aunt, Sister Florentine Schmitt, a Benedictine sister and a music teacher.

Joan attended and graduated from St. Francis High School in Little Falls. During her senior year she started to think of becoming a Franciscan Sister. Her parents urged her to abandon that idea because of her dads failing health. But Joan continued with her plans and entered the Franciscan Community on January 31, 1946. On August 12, 1946, she was accepted into the novitiate and received the name Sister Mary Cecilia. She made her first vows on August 12, 1948, and her final vows on August 12, 1951. She was a Franciscan Sister for 74 years.

Sister Cecilia ministered as a teacher and parish musician in several parishes, including Fergus Falls, Browns Valley, Little Falls, Waite Park, Morris and Foley. While directing the choir at St. Johns in Foley, she fell out of the choir loft, landed in the pews and broke her neck. She recovered from that major injury remarkably well.

Sister Cecilias life centered on music. She served actively on many committees and boards relating to music and the arts. She was a friend of art enthusiast Laura Jane Musser and received financial help from her. Her board activities include but are not limited to the Board of Directors of the Little Falls Symphony and chair of Heartland Orchestra Board.

She was also a long time board member of Very Special Arts of Minnesota, an organization dedicated to working with special needs children.

She did a considerable amount of writing. Her most outstanding contributions were Rapport and Success in Music Education, which became a college text, and Music and Dance, which grew out of her experience of teaching developmentally challenged youth. In addition, she wrote her family genealogy, The Donnay Story and The Schmitt Story as well as a book, Palm Weaving.

Sister Cecilia was preceded in death by her parents and her brothers Ralph, Thomas and wife Darlene (Buersken). Survivors include sister-in-law Mary Lou Schmitt (Preusser), nieces, nephews and her Franciscan Community.

A Memorial Mass will be held at a later time.

To order memorial trees or send flowers to the family in memory of Sr. Mary Cecilia Schmitt, please visit our flower store.