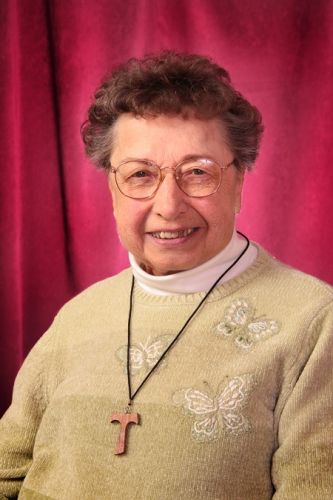 Magdalene Dulski was born on March 15, 1924, at St. James Hospital in Perham, Minn., to Stanley and Wanda (Rogalla) Dulski. She was the second of four children, who grew up in a faith-filled family where family prayer was very important. Her parents taught her the good use of holy water, blessed palms and candles, as they used all of these to bless seeds, fields and gardens.

Education was an important part of Magdalenes life, first as a student and later as a teacher. She began her education in the rural schools in the Perham area. Magdalene graduated from Perham High School and decided to become a teacher. She earned her education certificate from Moorhead State University and taught for three years at Bejou, Minnesota. Before she entered the Franciscan Convent, Mary had come to know the Franciscan sisters at St. James Hospital and also during summer catechetical classes taught by the Franciscan Sisters in her parish. Magdalene was received as a Franciscan Sisters on July 31, 1950 and received the name Sister Mary Andrew. She later chose to be known as Sister Mary. She was a Franciscan Sister for 67years.

Sister Mary was a quiet, gentle and considerate person who cherished privacy and solitude. She loved to teach children and adults and was lovingly respected by those she taught. She was a nature loversunsets, dew on the grass, flowers, storms, birds, trees, sky, and snowall had a way of drawing her closer to God who created it all.

Sister Mary was preceded in death by her sister, Leocadia Dombeck and brothers, Chester and Paul Dulski. Survivors include nieces and nephews, sister-in-law Mary and her Franciscan Community.

To order memorial trees or send flowers to the family in memory of Sr. Mary Dulski, please visit our flower store.