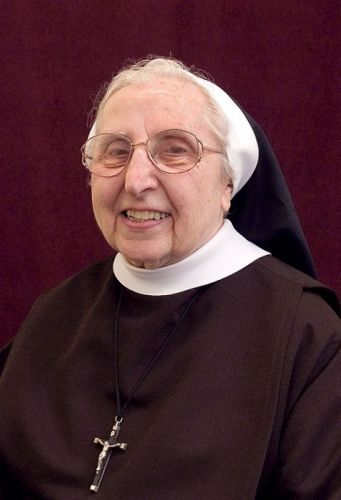 Frank and Catherine (Weyandt) Gangl welcomed their first girl (after four boys) on March 2, 1922. She was baptized on March 5 and named Frances Elizabeth. Two more girls followed Frances to complete the family. The Gangls lived in St. Paul, Minn., and were members of St. Bernards Parish.

Frances attended St. Bernards Grade School, where she was taught by Benedictine Sisters. She attended Washington High School where, in her senior year, she was able to take accounting, which proved very useful in her many years of hospital ministry.

After graduation in 1940, it was difficult to find a job, so Frances took what was available and worked in an insurance company.

Frances had thoughts of entering St. Francis Convent as her three cousins (Sisters Karline, Thomas and Giles Weyandt) who had entered previously. She entered St. Francis Convent on January 19, 1947, and on entering the novitiate, Frances received the religious name of Sister Mary Matthias. She made first vows on August 12, 1949, and final vows on August 12, 1952. She was a Franciscan Sister for 70 years.

Sister Matthias ministered as an office manager and an accountant for more than 60 years. During her time at St. Gabriels Hospital, St. Francis Campus Service was established and she assisted in that department for many years. Her ministry extended far beyond her office walls. She served as mentor, counselor and lifelong friend for many of the staff at the various hospitals at which she worked. Following her retirement, many former and current employees of St. Gabriels would join Sister Matthias for lunch at the convent. In 2001, she received the Francis Award from Unity Family Healthcare, recognizing her contribution in promoting the Franciscan values at St. Gabriels.

In her retirement, Sister Matthias spent time praying, reading, crocheting and doing puzzles. To summarize her life, she said: God has been so good. Sister always enjoyed visits from family and friends, especially her sister, Kay. She had a great sense of humor and enjoyed telling stories.

A Mass of Christian Burial will take place at St. Francis Convent on Friday, September 15 at 11 a.m. Friends may call at St. Francis Convent on Thursday, September 14, from 4-8 p.m., with a Franciscan prayer service at 7 p.m. and from 8:30 a.m. until the time of the funeral on Friday at 11 a.m. Arrangements are by Emblom-Brenny Funeral Service, Little Falls.

To order memorial trees or send flowers to the family in memory of Sr. Mary Mathais Gangl, please visit our flower store.