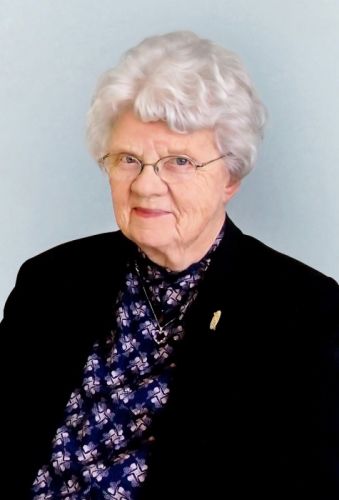 Frieda Alberta Pipp was born on February 25, 1924, in Draschitz, Austria. She was the only child of the late Urban and Mary (Tschurwald) Pipp. Frieda moved to the United States in 1940 and settled with family in Milwaukee, Wis. She attended Mercy High School and graduated in 1942.

Sister Mercita obtained her RN at St. Francis Hospital School of Nursing, Breckenridge. In 1959 she earned a BS in nursing, and in 1968, a Masters degree in nursing administration, both from Marquette University. She did further studies in administration at Catholic University of America in Washington, D.C. She also was a certified Reiki Master.

In her ministry as an RN, Sister Mercita was a staff nurse, nursing supervisor, director of nursing and instructor. She also served in administration with her final health position being Vice President of Trinity Memorial Hospital, Cudahy, Wis. In addition, she served as an Assistant Minister on the Community Board of the Franciscan Sisters of Little Falls from 19801984.

In 1967 Sister Mercita went to Cartagena, Colombia, South America as a member of Project HOPE. This was perhaps the most significant and satisfying experience of her long career in health care. She said, Its (Project Hopes) philosophy reflected minepeople distinguished by giving themselves through performance and achievement who share the common interest of supporting the highest ideals, traditions and purposes. Her time with Project Hope was primarily in Cartagena, Colombia, but she also spent time in Venezuela and Brazil.

After retiring from active health care ministry, Sister Mercita returned to Marquette and took courses in parish nursing and grief counseling. She became very involved in pastoral ministry and parish nursing and was on the staff of St. Stephens Congregation in Milwaukee.

Survivors include her godchild, Tanya Fondino; cousins, friends and her Franciscan Community.

To order memorial trees or send flowers to the family in memory of Sr. Mary Mercita Pipp, please visit our flower store.