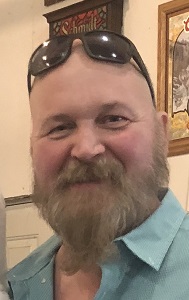 Stephen Stumpf, 51 year old resident of Royalton died Thursday, May 23 at the St. Cloud Hospital after a short battle with aggressive melanoma. A Celebration of Life will be held on Wednesday, May 29 at 11:00 A.M. at Holy Trinity Catholic Church in Royalton. A visitation will be held from 4:00-8:00 P.M. on Tuesday and from 10:00 A.M. until the hour of the service on Wednesday at the church.

Stephen was born November 14, 1967 in Little Falls to Melvin and Mary Ann (Scepurek) Stumpf. He attended primary school in Royalton and graduated from Upsala High School in 1986. In the spring of 1986, Stephen started working for Central Marble in Rice. In 1998, He was united in marriage to Dorothy Voss on August 19, 2000. He started his own business, SS Express DJ Service, which he was still operating. Stephen enjoyed playing darts, fishing, music and hanging out with friends.

He was preceded in death by his father, Melvin; brother-in-law, Jeff Lowe and a niece, Stephanie Koll

To order memorial trees or send flowers to the family in memory of Stephen "Steve" Stumpf, please visit our flower store.