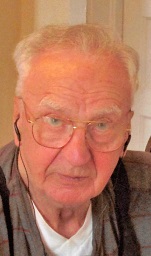 Steven H. Gangl, 92 year old resident of Royalton, MN passed away Wednesday, June 21, 2017 at St. Gabriels Hospital in Little Falls, MN. Mass of Christian Burial will be at 11 AM on Tuesday, June 27 at Holy Trinity Catholic Church in Royalton, with Fr. Roger Klassen officiating. A visitation will be held one hour prior to the service at the church. Burial will be in the parish cemetery.

Steven was born on April 12, 1925 in Buckman Township, Morrison County, MN to Frank and Theresa ( Kholenberg) Gangl. He was united in marriage to MaryAnn Yorek on October 28, 1947 at Holy Cross Catholic Church in Harding, MN. The couple farmed in Buckman Township. They moved to Royalton in 1967. Steven worked for WCI (Electrolux) in St. Cloud for 30years. He was a volunteer fireman in Royalton for 14 years. Steven enjoyed woodworking. He was a member of Holy Trinity Catholic Church and served as a church usher. Steven was a member of St. Michael Society and the IAMA Union for 50 years.

To order memorial trees or send flowers to the family in memory of Steven Henry Gangl, please visit our flower store.