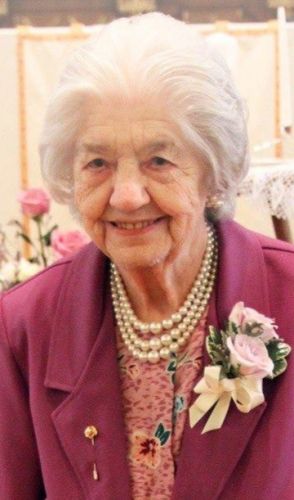 Mass of Christian Burial will be held at 10:30 a.m. on Wednesday, March 23rd at St. Josephs Catholic Church in Pierz, MN, with Fr. Kenneth Popp officiating. Interment will be in the parish cemetery. A luncheon will be served at the parish hall at St. John Nepomuk Catholic Church in Lastrupimmediately following the burial.

Theresa Catherine Kimman was born on July 23, 1917 in Pierz Township, Morrison County, Minnesota the daughter of Frank and Elizabeth (Boehmer) Kimman. She grew up on a farm in Pierz Township and attended country school through the eighth grade. She was united in marriage to Raymond Fischer on December 30, 1941. The couple farmed in Buh and Granite Townships until their retirement in 1979. They then moved to Pierz and in April of 2006, Theresa moved to Rose Court. Theresa was a member of St. John Nepomuk in Lastrup and after the move to Pierz she joined St. Josephs Catholic Church in Pierz. She was also an active member of the Christian Mothers in both parishes. Theresa faithfully volunteered at the Villa for 36 years pushing the old people to the chapel and their activities. She also chaperoned the residents to their various appointments. Theresa enjoyed gardening, strawberry and raspberry patch and always had apple trees. She also enjoyed playing ball with the grandchildren and great grandchildren and even pitched until the age of 95. Other interests included playing cards, socializing and visiting with resident at the Pierz Villa, and quilting with her family. She will be greatly missed by family, friends, staff and resident of the Pierz Villa and Rose Court apartments.

In lieu of flowers, memorials preferred to the Pierz Villa.

To order memorial trees or send flowers to the family in memory of Theresa C. Fischer, please visit our flower store.